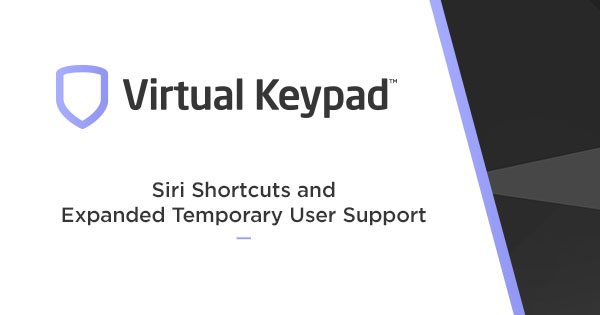 If you use an Apple® iPhone®, you no doubt have prompted Siri® to answer a question. With the Virtual Keypad™ app 6.18.4 update for iOS, you can also use Siri to control several basic functions with your DMP security system. Set up is easy; simply go to Settings > Siri Shortcuts to access and create your Siri shortcuts.

Siri can activate your Favorites, as well as arm or disarm your system. For instance, after “Hey Siri,” say one of these phrases to select an arming type:

Expanded Temporary User Support
“If you’re walking out the door, and you don’t have time to arm your system, have Siri do it for you,” says Clayton Tummons, vice president of software for SecureCom Wireless. “That’s the beauty of voice controlled smart assistant — it’s a shortcut for managing routine system features.”

For iOS and Android users, this Virtual Keypad app update also offers expanded temporary user support for XR panels updated to firmware Version 191 or higher. You can now set start dates to a Temporary User. Once that code has reached its expiration date, the user's status is changed to inactive.

Improved Video Doorbell Performance for Android
If you're an Android user and update to version 6.18.6, you'll also experience faster load times when viewing live video feeds from your video doorbell.

Virtual Keypad app updates are available for download, free of charge, from the Google Play™ store and the App Store®.

If you have any questions, please contact DMP Inside Sales at 877-757-4367 or at InsideSales@DMP.com.