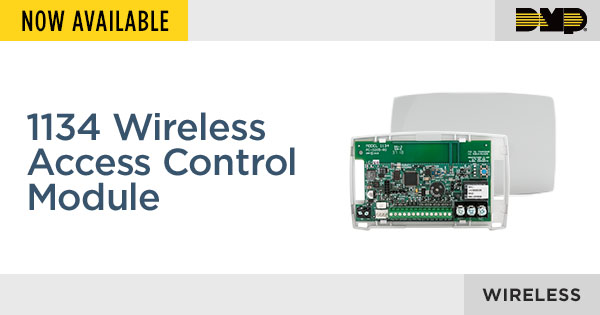 Sometimes access control can get complicated, and you never know what situation you’ll find yourself needing to add another door. With the new 1134 Wireless Wiegand Module from DMP, you have the ease and flexibility to add access control in nearly any environment.

For example, when adding access control to a gate or door that is not connected to the rest of the main building, DMP’s 1134 module performs the same functions as all of DMP’s 734 modules, all while using 900 MHz frequency-hopping spread spectrum DMP Two-Way™ Wireless to communicate with the control panel.

“The 1134 module is an ideal solution for large installations,” says Brian Crouse, product manager for DMP’s Wireless & Keypads. “While avoiding costly wire runs or trenching, the 1134 can also help you save time and can be installed very easily without involving an IT staff.”

The 1134 Wireless Wiegand Module allows you to use the powerful built-in access control capability of DMP panels that provide access control, arming, and disarming using proximity, mag-stripe, biometric or other Wiegand-output readers. Like each of DMP’s 734 modules, the 1134 allows you to program up to seven different card formats in addition to the DMP card format. This greatly expands your flexibility to easily use a format that your customers are already using without replacing existing cards. Plus, all user codes and credentials can be encrypted, when enabled in the Panel.

DMP’s 734 Wiegand modules have proven to be reliable performers over many years of experience in many thousands of installations. Combined with DMP Two-Way Wireless, the 1134 model is sure to become the must-have module in access control for large installations.

View the documents below:

For questions or more information, contact our Inside Sales team at InsideSales@DMP.com or 877-757-4367.